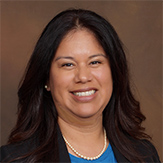 Dominique Quevedo oversees all the domestic violence, family law and immigration work for LAFLA, including three courthouse-based domestic violence clinics. Dominique serves on the executive committee of the Long Beach Police Department Women’s Advisory Council and oversees compliance within the Foundation. In 2009, she received the Cal State University, Long Beach Lilian Robles award by the President’s Commission on the Status of Women and the Department of Women’s Gender and Sexuality Studies for her legal advocacy efforts. In 2013, End Abuse awarded Dominique the Domestic Violence Advocacy Award for her work with victims of violence in Long Beach.

Dominique has worked at LAFLA since 2006. Prior to her role as Managing Attorney, she was a senior attorney within the Supporting Families Workgroup. In that capacity, she oversaw several pro bono projects. She has created fruitful partnerships with the U.S. Citizenship and Immigration Services. Dominique received her JD from Loyola Law School, her Master’s Degree of Social Welfare from UCLA and her undergraduate degree from Westmont College.