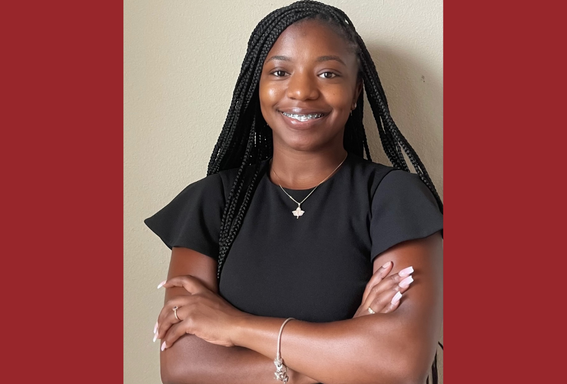 The LAFLA Equity & Inclusion Fellowship (LEIF) Program engages and empowers law students who are historically underrepresented in public interest law. During their terms, LEIF Fellows work as summer law clerks and participate in various events and programs where they help LAFLA clients, build their legal skills, and meet with other LEIF Fellows. They also complete a final written project. We will feature some of those written projects on our website throughout the fall.
2022 LEIF Fellow Diamond Humphrey meditated on the complexities and failings of the criminal justice system and the ways in which children affected by parental incarceration become “pressured diamonds.” Diamond’s narrative is inextricably intertwined to that of a LAFLA client named James she worked with over the summer, as both overcame the negative effects of living in a system that so often denies important opportunities for success for children of incarcerated parents. Diamond’s admirable perseverance to achieve her goals mirrors Jame’s in a remarkable way that you can read more about below:

As a child, your parents are your first teachers, providers, and protectors. You expect the protection to last a lifetime because that is their duty on earth. Our innocence would not allow us to see past our parents’ “parental roles” and see them just as human. However, the world has a way of stripping that innocence from millions of children without empathy. Children with incarcerated parents are inadvertently victims of the criminal justice system. System-impacted children face numerous challenges and hardships that shape their development.

The children’s book “Demetri Makes a Memory Quilt” explores the effects of parental incarceration. Menart, R. (2021), Demetri Makes a Memory Quilt, Untold Community Press. Demetri is a young boy whose mother is incarcerated. It begins with the young boy anxiously shuffling through the mailbox, looking for a letter from his mother. When he discovers the letter is not there, his emotions shift from anxious to sad. Letters are significant to system-impacted children because that is one of the primary sources of communication with an incarcerated individual. As time passed, Demetri experienced grief and mood swings and could not stay focused in school because of his constant worry about his mother. The book explores how Demetri handles his situation with the help of his supportive family members.

The author does a great job of expressing the deplorable effects that parental incarceration has on a child, such as psychological problems, trauma, and antisocial behavior. Although it is a short story, it illustrates the plight of children living with the ramifications of a criminal justice system that takes their parents away without providing support. According to the Pew Charitable Trusts, about 2.7 million children in the U.S. have an incarcerated parent, which comes out to about one in every twenty-eight kids. Those figures are one in nine for Black children, six times the rate for their white peers. Pew Charitable Trusts, Collateral Costs.

Like Demetri, I was a Black child impacted by the legal system. Now, I am a first generation college graduate and law student from a working-class family. My wildest dream was to break generational curses and change my family circumstance. I worked diligently to fulfill that desire; however, my reality made my pursuits seem unattainable.

My mother was my household’s sole provider as my father served a lengthy mandatory prison sentence. When I was 15 years old–a sophomore in high school–my mother was sentenced to four years in federal prison. This traumatizing experience crushed my dreams. I felt like my family’s fight to break generational curses was no longer my responsibility. I lost my mother to a system that I felt was impossible to beat at an age where a child needs their parents’ guidance the most.

Additionally, I had to move from New Bern, North Carolina, a small rural town where I felt comfortable, to Portsmouth, Virginia, a bigger city, to live with my aunt. Like Demetri’s close relatives, my aunt was my saving grace in my story. After overcoming depression due to my parents’ absence, I vowed never to let my current circumstances define my future success. My trauma of growing up without my parents’ during my fundamental growing stage fueled my desire to become a zealous advocate in the criminal justice system, which I credited for my pain.

The fictional character Demetri and I have a similar story because we overcame the challenges of having an incarcerated parent (or two) with great family support. While this altered our development, the story looks/sounds different for the millions of children who do not have family support. Research dating to the 1980s has generally suggested that parental incarceration is associated with adverse child outcomes. For instance, parental incarceration has been associated with depressive symptoms, delinquency, and social exclusion that persists into adulthood. Martin, E. (2017), Hidden Consequences: The Impact of Incarceration on Dependent Children. NJI Journal, (278).

As a Summer Law Clerk for the Legal Aid Foundation of Los Angeles (LAFLA), my supervising attorney assigned me the task of completing a Certificate of Rehabilitation for James. James’ story aligns with the research that explores the destructive effects of parental incarceration.

James was raised by a single mother due to his father’s incarceration. He grew up in the inner city of Los Angeles County in the 1990s, where gang activity was prevalent and growing. Without the proper guidance, James found himself mixed in with the wrong crowd, and he soon realized that he was following in the footstep of his father.

At fifteen, James was taken from his mother’s home and placed into a group home. He then went from group home to group home until he eventually aged out of the foster care system. Once James aged out of the system, he became homeless. He did everything he could to protect himself and survive in the streets of Los Angeles, including things that were against the law. Initially, he was charged with petty crimes such as vehicle code violations, but as time went on and being homeless became more challenging, his charges gradually increased in severity. By the age of 21, James had over seven convictions at a young age and spent countless days in and out of jail. By twenty-four, he received his first felony conviction and was sentenced to eight years in state prison.

While incarcerated, James received his GED and began taking college courses. Once released, James changed his life and started on a new path. He began monthly therapy sessions, found a stable home, and became a certified automotive technician. He later went on to open his first automotive shop. In 2020, James had a near-death experience that left him temporarily disabled. While acclimating to his new routine, he decided to switch career paths to become a software engineer. James was aware of the obstacle he may face because of his past, so he partnered with LAFLA to expunge his record because it does not reflect the man he has become. James’ troubling beginning stems from his lack of guidance and resources as a youth. However, even after being impacted by the criminal justice system for most of his life, he made a complete recovery.

James’ story provides a glimpse into the harsh reality of parental incarceration. Statistics indicate that children of incarcerated parents are, on average, six times more likely to become incarcerated. Martin, E. (2017), Hidden Consequences: The Impact of Incarceration on Dependent Children. NJI Journal, (278). The criminal justice system saw James as a delinquent; however, he was a direct product of the lateral effects of parental incarceration. Instead of nurturing and providing resources to this broken child, he became a victim of his circumstances, which had negative impacts.

Research findings on parental incarceration and children’s risk factors are mixed. However, a great deal of research suggests that the parent-child bond’s strength or weakness, the child’s quality, and the family’s social support system play significant roles in a child’s ability to overcome challenges and succeed in life. Martin, E. (2017), Hidden Consequences: The Impact of Incarceration on Dependent Children. NJI Journal, (278). Therefore, the child needs to be surrounded by a community of people that can provide a robust support system during their parents’ absence.

Parental incarceration is a complex issue that provides insight into a child’s development. Therefore, the research must continue, and policymakers must explore avenues to mitigate the damage of parental incarceration on a child. I like to refer to children affected by parental incarceration as “pressured diamonds”- victims of the criminal justice system who are neither acknowledged nor given a platform to be heard. Often these children fall victim to their circumstances and continue the cycle of inter-generational incarceration because so many systems fail to act to provide the necessary support for them to overcome their adverse upbringing. As I transition into the next phase of my legal journey, I will amplify the voices of those Pressured Diamond to ensure the justice system does not continue to forget them.