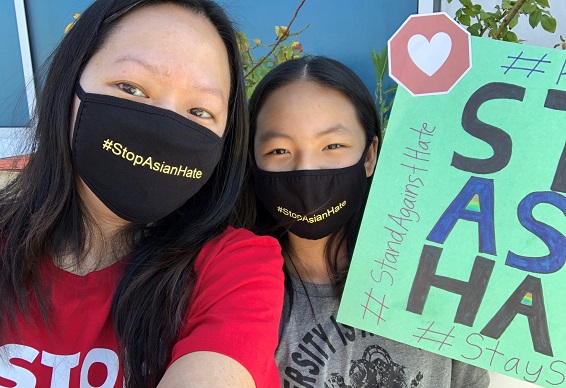 [W]e have much work to do, in solidarity with other communities of color, to demand our own space and a meaningful place in this land we call home. This includes not only citizenship, but also dignity, humanity, safety, acceptance, civic participation, leadership, pride, power, and so much more. I am proud and honored to be at LAFLA, where we are continually challenging ourselves and seeking to enhance our approaches, goals, and advocacy to authentically and equitably serve all our diverse communities.

When I joined the Legal Aid Foundation of Los Angeles more than 21 years ago, my focus was to conduct outreach to and represent Asian American and Pacific Islander immigrant survivors of domestic violence in their family law and immigration matters. Being from an immigrant family, I was accustomed to navigating across different linguistic and cultural spaces. I had previously lived on the East Coast and in the Midwest – places where Asian American and Pacific Islander populations were much smaller and more spread out. Active in the Asian American Studies movement in college and law school, I learned the rich history of activism, resilience, and solidarity in our communities. At LAFLA, I was hoping to find a small place for myself to somehow contribute to this rich history and serve our diverse communities. My project, however, proved far more challenging than I ever imagined, as I found myself maneuvering to access communities that historically had been grossly underserved. As with many things in legal services, I quickly realized that there was no easy formula for providing meaningful services to linguistically isolated communities.

I was fortunate to become part of an emerging and evolving dialogue and movement, standing on the shoulders of many others at LAFLA and among our partner organizations, who saw the need for inclusive and equitable services for all communities. LAFLA’s Asian and Pacific Islander Community Outreach Project (API Project) had been created in the 1990s to address the growing needs of the increasing numbers of Asian Americans and Pacific Islanders in the greater Los Angeles area. Asian American and Pacific Islander communities have always been a large part of the fabric of the Los Angeles area, currently comprising about 16% of the county or about 1.6 million individuals. These communities include some of the most linguistically isolated in the state. Californians speak more than 220 languages, and in Los Angeles County, 57% speak a non-dominant language and over 2 million have limited proficiency in English.

With the majority of the Asian American and Pacific Islander population in Los Angeles County not using English as their dominant language, it was apparent that the most critical deterrent to seeking legal services were linguistic and cultural barriers. Reports have found that limited English proficiency has impacted the “ability to access fundamental necessities such as employment, police protection, and health care.” Unsurprisingly, access to critical services has proven difficult for individuals who speak a language other than English at home, who have higher rates of poverty than the general population. These linguistically marginalized communities were often the most isolated and vulnerable, making services and benefits very difficult to access and obtain.

We recognized that the diversity and multiculturalism we all celebrate must also be honored by providing equitable multilingual services to all those seeking access at LAFLA. To address this, LAFLA made a concerted effort and commitment to devote considerable resources to hiring bilingual staff, providing appropriate language services through interpreting and translations, and collaborating with other community-based organizations to serve our local communities. A key component of LAFLA’s API Project has been its dedicated language lines in Korean, Chinese (Cantonese and Mandarin), Japanese, Vietnamese, and Khmer, with bilingual staff conducting intake and providing ongoing in-language support. Also, until we had to scale back in-person operations last year due to the pandemic, we also conducted regular intake at various community legal clinics and through partnerships across Los Angeles County, including in Koreatown, Chinatown, Cambodia Town (Long Beach), San Gabriel, Thai Town, and Little Tokyo. Through these efforts, we found that some of the greatest legal needs in our communities included family and immigration law assistance, particularly for those who were survivors of domestic violence, sexual assault, human trafficking, and other crimes. The lack of safe, affordable, and accessible housing was also a great concern.

In addition to ensuring that our communities have entry points and full access to all of LAFLA’s services, the API Project has also conducted pioneering work to ensure language access to the courts, public benefits, immigration services, and other government agencies and systems. Advocating for language rights and language justice organically developed as an integral part of our work serving our diverse communities.

History of Racism and Violence Against API Communities

With the recent attacks on Asian American and Pacific Islander communities and the ongoing public health crisis, the need for greater awareness of our roots, our resilience, and our collective strength has never been greater.  Although the pandemic exposed and exacerbated these issues and barriers, we know that racism and violence against our communities have existed for centuries and are rooted deeply throughout our history from the exploitation of Chinese workers leading up to the Chinese Exclusion Act of 1882 to the misogyny, fetishization, and trafficking of Asian women to the incarceration of Japanese Americans during World War II. In our history, we have had a myriad of hate crimes and violence against Asian Americans from riots that destroyed entire ethnic communities throughout the 1800s and 1900s such as massacres of Chinatowns and Chinese workers in Los Angeles in 1871, in Tacoma, WA in 1885, in Rock Springs, Wyoming in 1885, and Hells Canyon, Oregon in 1887, to name a few. The Bellingham Riot of 1907 forced out an entire South Asian community of workers in Bellingham, WA, and Filipino workers were targeted in the Watsonville Riots of 1930 in Northern and Central California. Native Hawaiians and Pacific Islanders have suffered from the seizure of lands, colonization, human rights violations against many Indigenous peoples, and devastating environmental injustice, such as the U.S. government’s nuclear testing program in the Marshall Islands from 1945 through 1958, which has affected the health and safety of generations.

In more recent decades, the 1982 murder of Vincent Chin, the 1999 murder of Joseph Ileto, and the 2012 massacre at the Sikh Temple of Wisconsin in Oak Creek, as well as many other events have led us to more than 6,600 reported hate incidents against Asian Americans and Pacific Islanders since the pandemic began. In response, Asian American and Pacific Islander communities and allies have come together like never before to call for an end to systemic racism. Against the backdrop of a racial reckoning in the U.S., with the Black Lives Matter movement, a deadly pandemic disproportionately affecting Latinx, Black, and Indigenous communities, and the demand for humane immigration policies and treatment of undocumented individuals, among many other important issues, this is a moment in history like no other to confront structural inequities and abolish white supremacy.

Last year, while advocating for language rights with a government agency, I was told that the problems we raised were just a “chink in the armor” and would get worked out. My mind went numb as I processed the use of the outdated phrase, part of which is a racial slur I heard routinely growing up in suburban Maryland. The rest of the discussion remains a blur as so many triggers and thoughts were racing through my brain. The last time I remember hearing the phrase was in 2012 when ESPN used it to describe the end of Jeremy Lin’s winning streak. The writer was fired, and ESPN apologized. Despite the momentary shock and attention that was paid to the incident, it was quickly forgotten and apparently acceptable for this government employee to use this racial slur without a second thought. After all, we are seen as perpetual foreigners who keep our heads down and will not complain. The pervasiveness of these sentiments has allowed racism and violence against our communities to persist.

After the March 2021 Atlanta mass shooting, which included six women of Asian descent, the renowned journalist Nikole Hannah-Jones made a striking statement that “anti-Black and anti-Asian racism and violence run in tandem in the U.S. Both groups were brought here for labor but never meant to be citizens.” The painful reality of this truth illustrates that we have much work to do, in solidarity with other communities of color, to demand our own space and a meaningful place in this land we call home. This includes not only citizenship, but also dignity, humanity, safety, acceptance, civic participation, leadership, pride, power, and so much more. I am proud and honored to be at LAFLA, where we are continually challenging ourselves and seeking to enhance our approaches, goals, and advocacy to authentically and equitably serve all our diverse communities.

Joann Lee, Special Counsel on Language Justice, has provided direct legal services to the growing indigent Asian/Pacific Islander immigrant population in the Los Angeles area at LAFLA since 2000. Joann specializes in family and immigration law, with a focus on representing survivors of domestic violence, sexual assault, and human trafficking. Bilingual in Korean, she has extensive experience navigating government entities to obtain meaningful language services for individuals who do not use English as their dominant language, including filing administrative complaints and litigation based on civil rights language access requirements. In 2015, Joann was appointed to the California Judicial Council Language Access Plan Implementation Task Force. Active in the local community, Joann has served on the boards of the Korean American Bar Association, Korean Resource Center, and the Center for the Pacific Asian Family. She is a graduate of Northwestern University and George Washington University Law School.

* If you have any suggestions, please leave them in the comments below!

We Are Not a Stereotype – Smithsonian Asian Pacific American’s video series. From their website: “This series explores and challenges the complexity surrounding the term Asian Pacific American, by breaking down into topics that span multiple timelines, geographies, and identities.” Suggested videos: The Bamboo Ceiling and The Model Minority Myth

Asian Americans – PBS documentary. From their website: “Asian Americans is a five-hour film series that delivers a bold, fresh perspective on a history that matters today, more than ever. As America becomes more diverse, and more divided while facing unimaginable challenges, how do we move forward together? Told through intimate personal stories, the series will cast a new lens on U.S. history and the ongoing role that Asian Americans have played.” Link to full playlist.

Report a hate incident and read others’ reports