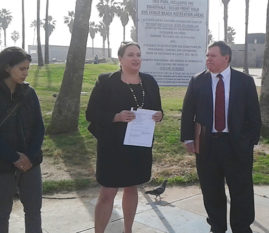 In a victory for preserving access to California’s coastline for all people in Los Angeles, the Legal Aid Foundation of Los Angeles (LAFLA) and co-counsel from Sheppard, Mullin, Richter & Hampton LLP, recently settled their case against the city of Los Angeles, marking the end of their court challenge questioning the legality of a 30-year-old beach curfew that took effect without state approval.

In 2015, LAFLA and pro bono partner, Sheppard Mullin, filed a lawsuit against the city on behalf of Jataun Valentine and Francesca De La Rosa, challenging the legality of the ordinance on the ground that the city had not obtained a required Coastal Development Permit from the California Coastal Commission and that it enacted the curfew without consideration of the public’s right to access the coast.

In 1988, the city of Los Angeles adopted the beach curfew, which closed off access to the coast from midnight until 5 a.m., along all 14 miles of Los Angeles’ shoreline.  In the years following its enactment, the law was often not enforced, but beginning in 2009, advocates for the homeless began seeing an uptick in the Los Angeles Police Department’s use of the ordinance against people who were homeless in the coastal areas of Los Angeles.  As the number of homeless people on the streets in Los Angeles increased, so did the police departments’ rates of enforcement.

With increased enforcement of the curfew came increased scrutiny of the law’s legality.  Since 2009, staff at the California Coastal Commission had been warning the city of Los Angeles that it was in violation of the Coastal Act when it enforced the curfew without a valid CDP, and advocates attempted to persuade the city to seek a permit and to explain and defend why it was significantly limiting public access to the coastline.  The lawsuit followed years of advocacy by homeless advocates, the California Coastal Commission staff — and even The Los Angeles Times. Each attempted to convince the city of Los Angeles to seek a CDP from the Coastal Commission.

Under the settlement’s terms, the city agreed to apply for the necessary CDP, and while the permit application is pending, police will issue warnings before citing people for violating the curfew.

“This was a victory for all people of the state of California. Public access to the coastline is enshrined in California’s Constitution, and preserving access for all members of the public, regardless of whether they can afford to rent or own a home in the coastal zone, is critically important. If the city feels that limiting that access is necessary, it needs to go through the proper channels and prove that it is justified,” said Shayla Myers, LAFLA attorney who worked on the case along with fellow LAFLA attorney Paul Estuar.

Co-Counsel and LAFLA Board Vice-President, Jim Burgess added, “The city’s decision to seek a Coastal Development Permit is the right one, not only for the plaintiffs and the city, but for every resident of the city and the state.” 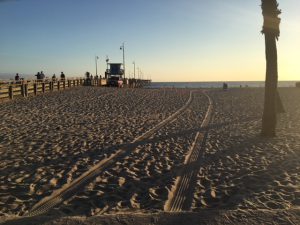 In 2017, after LAFLA plaintiffs received many favorable court rulings, the Los Angeles City Council unanimously voted to seek a Coastal Development Permit from the California Coastal Commission.  After the city filed an application for a permit, and following months of negotiations, the parties agreed to settle the lawsuit. The case was dismissed on April 27.

The settlement will ensure public debate and discussion before further beach closures in Los Angeles are adopted. The city agreed to seek approval from the California Coastal Commission before limiting public access to the coastline in the future.

“Not only did the city agree to seek a permit, but it also agreed that if the Coastal Commission denies the permit, it will stop enforcing the ordinance — and very importantly — the city will apply for a Coastal Development Permit for any new ordinance or amendment to the municipal code that restricts access to the coastline,” Myers said.

The city also agreed to correct language on signage that inaccurately states the hours beaches are closed to the public.